It was right around this very time last year that I was drafting my 19 for 2019, and was starting to stretch a little for ideas. It was also right around this time last year that I was at an annually recurring program I do for my job that carries on a thirty-ish year tradition of partnership between my employer and our local Elks Club, the Annual Elks Holiday Party, a mid-day banquet-style lunch for up to a hundred or so dedicated folks, many of whom look forward to this event all year, and many who strangely show up for few other of our programs. The lunch is followed by a “talent show,” though I’ve taken to referring to it as an open mic, a more apt description given its unstructured and relatively unrehearsed and unplanned format. Lights that don’t get a lot of other opportunity to shine glow like reactors on this day, and while it can sometimes be a little cringe-worthy, it truly does fill my heart with the joy of seeing some of these folks do something I don’t get to see them do the rest of the year, if or when I see them, like singing, playing piano, guitar, and recorder, and there is even an enthusiastic accordion player among them. What these shining lights have that I don’t really have is a certain level of comfort or desire to perform publicly. I’ve mentioned my longstanding angst about not feeling like I have a party trick, which by the time I came even close to developing one, I had complete anxiety about showing it off publicly, which is completely weird, given a long desire as an adolescent to be a performer and actually working as a radio DJ as a young adult. Now that I consider it, encountering blindness as a young adult and not knowing quite what to do about it for so long set the stage, if you’ll indulge my pun, for stage fright and performance anxiety. That’s ok, because for many years thereafter, I was just reading, thinking, and writing my way through college, and performance was rarely an explicit requirement.

Then I joined the Peace Corps, where I had no idea what expectations there would be around performance, constantly. The Peace Corps model suggests that everything be presented as a game, and this is where I became certain that I really don’t enjoy games. Kyrgyz culture also puts high value on performance, most often when one attends a toi, or party, where guests are served gut-busting amounts of food, defensive maneuvers to avoid over-consumption of bad Russian vodka or strong Kyrgyz whiskey are a must, and after max gluttony is reached, guests entertain one another singing or performing some kind of party trick. Grand celebrations, like graduating students from the training center I was working at in Bishkek, were also cause for showing off your talents and entertaining everyone in attendance, such that left me with some PTSD that makes me navigate away from Bill Wither’s Lean On Me, a great song, I’ll admit, I just now associate it with over-rehearsal for a performance I wasn’t really into, and had some other negative experiences with.

And now in my current job, I get to play MC at this annual event to a herd of cats with no time to give much structure to this portion of the program, so it’s an awkward spontaneous, real-time solicitation for performers, all the dead air in between that I must fill with banter as reluctant volunteers summon their courage, or folks who need a lot of support with their mobility get slow escorts to a performing area. And I was thinking last year, “is there a little something I can offer to help fill this time?” “Do I have a party trick I’m willing to share and model servant leadership?” I improvised the best I could by singing a German Christmas carol, not that I’m super enthusiastic about singing carols or the holidays generally, and again, performance. Learning all the classic Christmas carols in my 8th grade German class burned them so deeply into my subconsciousness that to this day, I instinctively go for German lyrics when those tunes are played. And I remembered a skill of sorts that I acquired during my Peace Corps service, something that made me feel, however briefly, that I had a party trick, something unique that would capture people’s attention, and I made a mental note then and there to add it to my 19 for 2019, with the intention that I might share this skill at this year’s Elks Holiday Party. .

If you’re Kyrgyz or have lived in or near Kyrgyzstan, you’ll at least recognize the name Manas, and possibly ait, or telling. Manas is the legendary origin and founder of the 40 Kyrgyz tribes and quite possibly much more to a supernatural level if you’re a true believer. Like many cultures around the world, Kyrgyz legends and traditions have been handed down through the generations orally. Telling the life story, adventures, and superhuman feats of Manas is a sacred oral tradition recited at length in poetic verse by only the hearty few who dedicate their lives to it, whose mission, purpose, and passion in life is learning the discipline of reciting the story of Manas for hours, even days, at a time, entering a trance-like, shamanistic level of being. Many aspire to this destiny, only a scant handful have truly achieved nationwide respect and veneration for their skills. As a Peace Corps Volunteer, one has a significant responsibility to learn as much as possible about your host culture, and within an organization where everything is a game, performance of local cultural traditions is pretty much mandatory at some point. That point peaked when my host mom (younger than me, by the way) and I were assigned by the Peace Corps to partner on a project in the name of strengthening our respective language skills, and she and possibly many Peace Corps staff thought it would be great if I learned this highly venerated cultural skill. 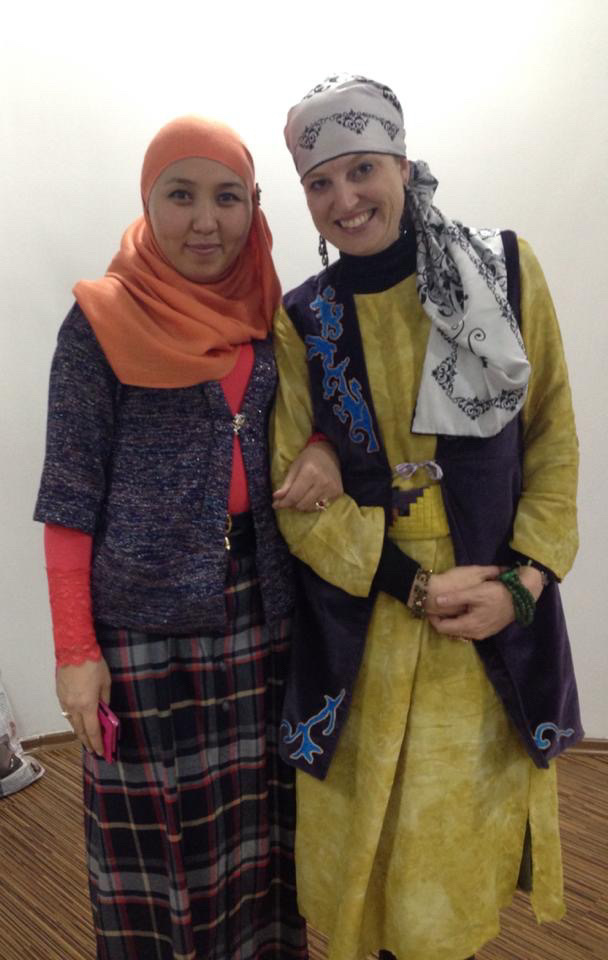 And so she connected me with a very young and talented student of this tradition, struggling just to get the text into an accessible format, let alone memorize the gargantuan passage everybody seemed to think would be no problem to memorize, me all the while negotiating edits to make it shorter, and many stressed hours of practice later, I almost had it down. Long enough to nervously perform at the Peace Corps language training, and to belt out one solid performance at the first of the two graduations I attended during my service.

Of course, I spent no time in 2019 resurrecting this skill, nor am I certain this is something I’d like to pick up again next year. I’ll just leave you here with the performance that was, and if you really want to see how it’s done, with a sample performance by the actually trained and skilled in this art of a student who patiently worked with me so I could pretend I was.

Tomorrow, it brings me much joy, that I will be writing about actively seeking joy while doing that very thing.