My Proclivity for harboring a bulging closet of clothes, jackets, scarves, shoes, bags, and other accessories is deeply rooted in the countless hours I spent wandering yard sales and thrift stores as a child. By the time I was a teenager, thrift store finds, actually at thrift store prices before the needle moved to vintage, fast became a significant source of self-expression, the more unique and funkier, the better. By young adulthood, an afternoon of junking, as my mom liked to call it, was how we bonded and spent quality time together. Compound this with an upbringing that instilled virtues of frugality, caring for and repairing your possessions to extend their life, and a tendency to “collect,” (translate hoarding), and you have a closet that still contains a few items I wore in high school, lots of items loaded with sentimentality, just about every piece has a story, and most of it is so me and not mainstream ideas of what is fashionable, that it’s timeless, in a way–I’ve never given two shits about what is in fashion this season, only what I like. Despite systematic low level purging on an ongoing basis, my wardrobe has always filled its alloted space to capacity. Being able to neatly fit a lot of things in a small space is a great and dangerous life skill acquired from growing up around hoarders, one that I’ve mostly used to my advantage, though as I get older, the nagging voice of the evils of rampant consumerism and amassing of egregious amounts of personal possessions niggles at my brain constantly, even if these items were acquired free or on the cheap and I’ve proudly squeezed maximum life out of them. My brain also worries about up or downcycling before their time, the trade off that up or downcycling represents as the least bad option, and the ethical dilemma of trading my psychological comfort for offloading more garbage into the universe. My general rule is that if I can store it, keep it more or less organized, and find and access things as I want them, I don’t necessarily have too much stuff.

My earliest closets were modest, and I was still early in my life of consumption. I had a generous closet in my Santa Barbara one-bedroom I inhabited for about five years that housed all my clothes, jackets, shoes, and then some. I moved into a tiny one-bedroom in Monterey during grad school, and downsized a little to accommodate, then living briefly with my ex-husband in a two-bedroom with a gloriously large, three-door closet that was filled almost entirely by my stuff. Pulling out of that apartment and relationship, and knowing my whole life was going into storage for an undetermined amount of time that became nearly a decade, I left some of it behind, though still had an impressive collection of clothes. Without permanent housing for a year, and then moving into a room in afriend’s house, Pulling a very small portion of my whole wardrobe to fit my new space, and actually going on a few proper shopping trips during those years in which I actually bought new clothes, a rare occurrence in my life. And what I had acquired in those years went right back in storage, minus a little purge, while I went off to the Peace Corps. I returned from the Peace Corps with my now husband and we soon bought a little townhome of our own and I could finally retrieve all of my worldly possessions from storage, including the generous wardrobe, and we have a good sized closet that is adequate, though not luxuriously large. Everything is out and mostly has a home and is accessible, though just not quite like I’d like–a little downsizing and reorganizing would make things just a little more comfortable. 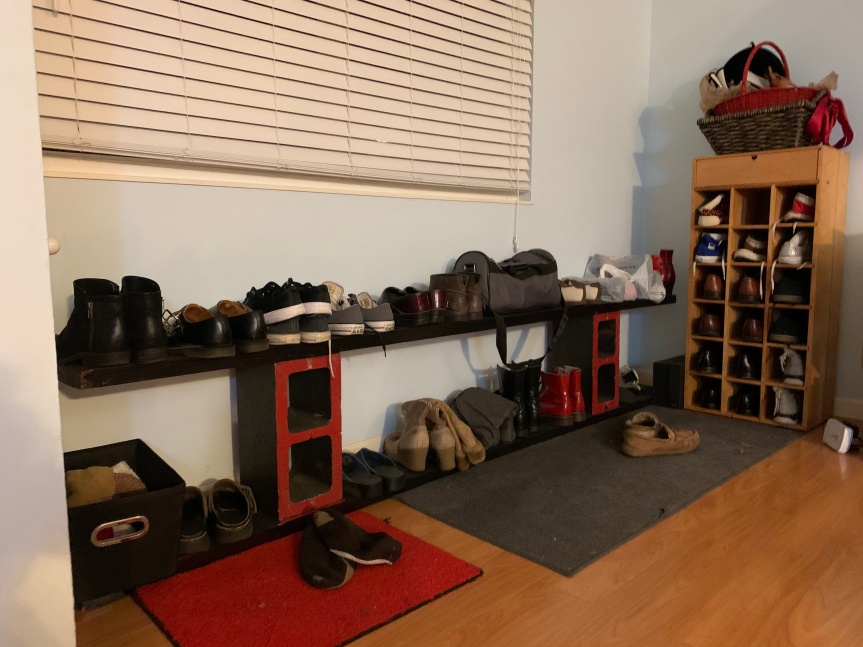 For someone who was never really into shoes, I have way too many pairs of shoes, all perfectly accessible just inside my front door. I’ve slimmed down my collection of jackets, though our front coat closet is quite small, and things are a bit crammed, especially since I hung extra accoutrement like scarves, wraps, and weather accessories on the inside of the door. And Gretchen Rubin is right, hangers that hold multiple items are not the secret to organizing, less stuff is–they make a small difference, but are mostly just as bulky as if everything hung directly on the rod.

I also acquired a fun collection of hats over the years that I feel I’d wear more if they were downstairs by the door with jackets, shoes, and scarves, where I accessorize before walking out the door, and there’s just no good place for them downstairs, so they sit in my closet unused because I tend not to think of them until I’m about to walk out the door. Belts and jewelry are also in my closet and reasonably accessible, though not as easily as I’d like, likewise handbags and purses that live in under-bed storage–they’re there, just not as readily available as I’d like. I’ve also got a small collection of pajamas and robes that I don’t wear often. Cumulatively, all this stuff is just a tiny bit more than really fits my current space. I’ve got a lot of ideas about how I’d like to purge, shift, and rearrange to make this all work better, I just haven’t taken much action, and most or all of my ideas would be facilitated by skimming at least a little off the top of all these categories. I’ve always had a constant, methodical approach to purging–I take out and put back items in my closet in a systematic way that naturally surfaces items I’m not wearing as much, and when the mood strikes, that is, I’ve seen an item in that place too long or too many times, and it also just doesn’t feel right anymore in that moment, it goes into a donation box that lives perpetually on the floor of my closet. While this has some effect over time, I clearly need to up my game and introduce new strategies.

This item definitely rolls over to next year, and with a new approach–I’ll begin by inventorying all of these items and committing to purging at least 5% of each category, a modest tweak to the quantity that I expect to ease the small amount of congestion I currently feel in my wardrobe. I’ll also list and begin moving on specific action items that all seem to be interdependent and causing a blockage on all the moving and shifting I’d like to do–moving my hats downstairs, ordering a blanket made from excess t-shirts, selling some special/vintage items, and maybe even making room to hang my pants instead of folded in stacks. This might also include resolving the quandry over how to better utilize the shelf space above hanging rods, as well.